The role of positive parental practices on problematic behavior in adolescence is addressed in the chapter “Parental knowledge and its sources: Testing their predictive value on violent and non-violent behaviour in adolescence”

The book A closer look at parenting styles and practices, recently published by Nova Science Publishers, includes the chapter “Parental Knowledge and Its Sources: Testing their predictive value for violent and non-violent behavior in adolescence”, by Olalla Cutrín, Lorena Maneiro and Laura López Romero.

The knowledge that parents have about their children’s activities, friends, and whereabouts constitute one of the most relevant positive parenting practices that prevent future problematic behaviors. A longitudinal study conducted by Dr. Olalla Cutrín delves into the role of parental knowledge, as well as its sources of information, on the psychosocial development of adolescents. The results of this three-year longitudinal study are presented in the aforementioned chapter.

Research has consistently shown that family environments characterized by support and warmth, which encourages child autonomy and decision making, enable parent-child communication and disclosure. In this line, parental knowledge has been one of the most studied parenting practices in relation to psychosocial development in adolescence, including both normative and antisocial behaviors. Parental knowledge can, in turn, be obtained through different sources of information. Firstly, by means of child disclosure, that is, the willingness of children to spontaneously share such information with their parents; secondly, parental control, which refers to the information that parents obtain through the establishment of rules or requests for explanations; thirdly, parental solicitation, which refers to the information that parents obtain through conversations with their children or by asking about their lives. 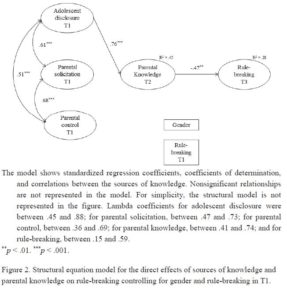 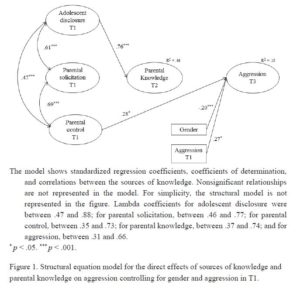