The adolescent drug use is one of the most important problems in current societies. In Spain, several intervention strategies are being carried out in order to reduce the substance use among young people, especially the consumption of alcohol and cannabis, which every year begins at earlier ages. In this context, the UNDERISK group carried out a pilot study of the Keepin’it REAL programme for the prevention of drug use in Galicia, a programme that was previously developed and evaluated by the University of Arizona (United States) in different countries.

Keepin’it REAL is a programme intended to avoid drug use and other problem behaviours in adolescence, tailored to promote personal and social skills. Adolescents acquire resistance skills for social pressure to use drugs or engage in other antisocial behaviours. The main objective of the programme is to learn how to say NO to offers of substances such as alcohol, tobacco, and other drugs in a practical and simple manner, using strategies represented by the acronym REAL: Reject, Explain, Avoid and Leave.

The Global Center for Applied Health Research at the University of Arizona (ASU) website contains all the information about the Keepin’it REAL programme and its adaptations to different cultural contexts. 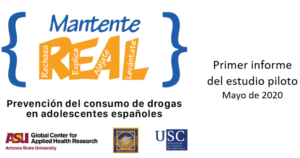